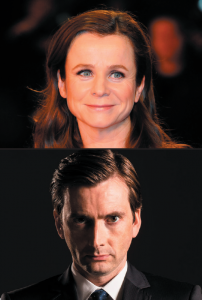 Beverly Hills, CA (October 23rd, 2018) – David Tennant (“Doctor Who”, “Broadchurch”), fresh off the set of his new BBC show “There She Goes” and Amazon’s upcoming “Good Omens”, has signed on to star opposite Emily Watson (The Theory of Everything, Kingsman franchise) in top TV director Mark Brozel’s (AMC – “Humans”, Netflix – “Troy: Fall of a City”, YouTube Premium – “Origin”) feature-film debut QUICKSAND. The film is currently slated to shoot April, 2019 on the island of Crete, Greece.

“I’m thrilled to re-unite David and Emily on the big screen in this taut psycho-thriller,” said director Mark Brozel.

QUICKSAND is a tense thriller about British couple, Dan (Tennant) and Sarah (Watson), who are living out their dream in the Mediterranean. But their paradise comes to an abrupt end when their visiting son is tragically murdered by a local youth. Dan, grief stricken, is offered a chance at revenge by a dangerous stranger who won’t take no for an answer, but the price of revenge is one more murder.

The script was penned by Steve Lewis & Tony Owen with Mark Lavender and Joel Scott-Halkes producing. Tannaz Anisi (Voice from the Stone, Manhattan Night) and Greg Schenz (The Forgiven, Freeheld) will Executive Produce for 13 Films. The project will be presented to buyers at the upcoming American Film Market in Santa Monica.

“This script is terrifically well-crafted and deeply conceived. With rich psychological undertones and plenty of beautiful visual moments, it is a contemporary classic-in-the-making. And with this cast and director, it’ll take the audience on a visceral ride, resonating long-term,” said Mark Lavender.

Mark Lavender of Rough Sea Productions produced the festival-hit Frozen with a host of the aristocracy of UK actors including Shirley Henderson, Richard Armitage and Maxine Peake. Joel Scott-Halkes is founder of London based production company Osiko Films. They are joined by Executive Producer Peter Garde (Melancholia, Antichrist, Dogville) in cooperation with Indigo View.

David Tennant, Emily Watson and Mark Brozel are represented by the Independent Talent Group in the UK and UTA in the US.

13 Films is an international sales and finance company based in Beverly Hills founded by Tannaz Anisi.