After Taking Manhattan, Yvonne Strahovski Plots Her Next Move: Chuck, the Musical, Anyone?

Yvonne Strahovski sure does know how to keep a juicy secret.

Maybe the stunning actress picked up a few tricks of the trade while playing a CIA operative in two high-profile TV series, beginning with the lovable action-comedyChuck for NBC in 2007, then jumping into the 24 reboot 24: Live Another Day for Fox in 2014. 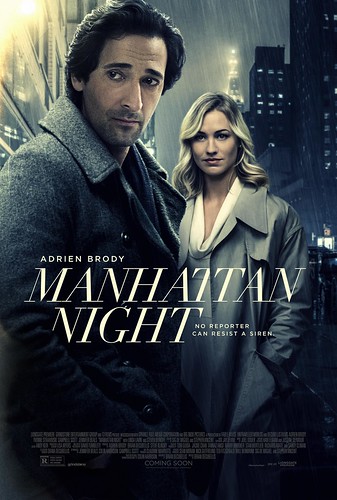 Only one of those popular shows will live another season (apparently without Strahovski), but this real-life international woman of mystery didn’t have to go undercover to find her next role. She’s Caroline Crowley, a sexy seductress with a secret (or two), in Manhattan Night.

“It’s definitely different from anything I’ve done,” Strahovski said over the phone last week from Los Angeles, happy to be back at her home-away-from-homeland base after a late-night flight. “It was kind of complicated. There’s a lot going on in this storyline. And certainly a lot going on with the character. … It took a lot of time to make sense of all the moving parts and all the pieces.”

The pulpy piece of New York City fiction (based on Colin Harrison’s Manhattan Nocturne novel) attempts at times to give its lurid, twisted tale a touch of class. “Some of it was hard to imagine how it would play out,” Strahovski said of the content.

The indie feature, released last Friday (May 20) in theaters and On Demand byLionsgate Premiere, also stars Academy Award winner Adrien Brody, Campbell Scott and Jennifer Beals, but it’s Strahovski’s pivotal role that will keep moviegoers on the edge of their seats.

An Australian native whose Polish parents emigrated to the Land Down Under before she was born, the 33-year-old glamour girl with a dazzling smile brought some spicy acting chops to the portrayal of Crowley, a troubled woman who has more complex sides — and private demons — than your typical ‘40s femme fatale.

And perhaps in danger of forever being typecast as an ass-kicking super-spy a laChuck‘s Sarah Walker or 24‘s Kate Morgan, Strahovski seemed to relish a chance to transform into the other woman. 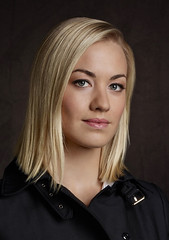 During a 2014 conference call for Live Another Day, she told me, “I’m more drawn to the intense, more emotional scenes” than the action roles that previously defined her career because “it’s not often just one reason as to why people do things the way they do.”

While Crowley may or may not be another attractive anti-heroine, her emotional baggage is almost as heavy — if not quite as hazardous — as that carried by Strahovski’s diabolical Hannah McKay in Dexter.

As a slamming serial killer, she turned McKay into a scheme machine who captured our hearts while matching wits — and body counts — with the lead character until they finished off Showtime’s gory story in 2013.

Strahovski has the range to make viewers find empathy in all her characters, whether they’re cold-blooded vixens like McKay or ‘60s elegant icons like the spirited Rene Carpenter of ABC’s nostalgic The Astronaut Wives Club. But whileChuck fans wait for Sarah Walker to one day reemerge (more on that later), their jaws might drop at the sight of Manhattan Night‘s most riveting performer.

The plot involves Porter Wren (Brody) a married-with-children tabloid newspaper columnist — considered these days “an endangered species” — who falls for Crowley the moment he lays eyes on her.

A former investigative reporter who relies on advice from Bazooka bubble gum comics, Wren tells his backstory in a series of splashy voiceovers that might make some old-timers yearn for the days of yellow journalism, when the smell of newsprint in the morning filled the air.

Whether Wren realizes it or not, Crowley is hiding something even as she shares information about the fate of her freaky husband Simon (Scott). Flashbacks show the squirrelly filmmaker with a bad haircut somehow convincing this gorgeous woman to marry him only hours after he buys her a couple of drinks the first time they meet in a bar.

Sex, lies and video cards enter the picture, along with Wren’s villainous boss Sebastian Hobbs (Steven Berkoff), who must have graduated with honors from the Sydney Greenstreet school of scenery chewing.

Of course, Crowley’s cry for help is an excuse for Wren to see this damsel in distress out of her clothes. White might be the favored color of her sophisticated wardrobe, but it has nothing to do with purity.

While Strahovski wore some skimpy outfits in Chuck, she hadn’t taken it all off for the cameras until now. So how did that birthday suit fit?

“Nudity in anything is always challenging — sex scenes or making out with people,” said Strahovski, who did all the above and dropped a few F-bombs in the R-rated film. “It comes with the job, obviously. But for this particular story, I always look at the story and the character and (consider), ‘Does it warrant it? Does it serve the story?’ And in this particular case, it did.”

More challenging for Strahovski in the making of Manhattan Night were the weather conditions, especially during some cold December nights in New York. Then there was the quick 28-day shooting schedule while she was working on The Astronaut Wives Club in New Orleans, along with the lack of rehearsals, which Strahovski said is “always sort of scary.”

Yet the cast led by Brody, whose film production company (Fable House) took onManhattan Night as its first major project, made it all worthwhile. 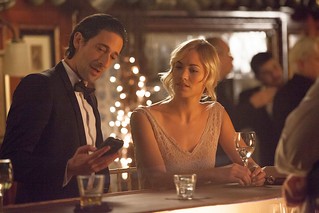 “He’s such a pro, obviously,” Strahovski (right with Brody) said with a laugh about the actor who doubled as a producer. “He was very involved in this project (his Dragon Blade co-star Jackie Chan was an executive producer) and added a lot of his own thoughts and changes to it. It was just super easygoing. We had a great time shooting it. And he was so open and collaborative. As was also the director (Brian DeCubellis). So we spent a lot of time — or as much time as we could really because of our schedules — talking prior to shooting.”

Working under a time constraint was a familiar experience for Strahovski, who went through that with the wonderfully weird cast of Chuck. And she was reminded of that time just days after posing for pictures with the TV show’s star at a screening ofManhattan Night last week in New York, that appearance undoubtedly stirring up the rumor mill about another onscreen reunion.

“Zach’s always a blast to work with,” Strahovski said of Zachary Levi, possibly her favorite leading man. “He’s always very fun and a lot of laughs. He’s a pro, that’s what he is. … He moves fast. We had to move fast on that show, though. He was such a team player. We had to always go, go, go, with limited budget and limited days to shoot. So, yeah, he was wonderful. We all sort of became a big Chuckfamily with our cast and crew. And everybody worked hard, you know.”

After following that physically demanding role with another, one spy tie seemingly has been cut for Strahovski, who played coy when asked if she was approached about 24: Legacy. “It’s not too simple an answer,” she said, declining to elaborate on the retooled Fox project that premieres Feb. 5, 2017 (Super Bowl Sunday), with24 star Kiefer Sutherland as an executive producer.

Yet the reemergence of sweet Sarah Walker remains a possibility as the 10th anniversary since that show’s debut nears. Hopeful Chuck fans still clamor to see the couple’s outcome as “one magical kiss” set up their future when the series finale in 2012 concluded.

“There’s always chatter about a Chuck movie,” Strahovski said. “So nobody’s opposed to it. It’s just a matter of getting everything lined up. And there’s a lot of chefs in that kitchen, you know. … But it is doable. But it’s also a matter of timing. Everyone’s obviously doing so many different things now. It would be a commitment that everybody would have to be available for.”

Since Levi is nominated for a Tony Award for his Broadway performance in She Loves Me and his TV co-star also has been on the New York stage (Golden Boy in 2012-13) and exhibited all the right dancing moves in previous episodes, mightChuck, the Musical be their next dream project?

Laughing at the suggestion, Strahovski replied, “I don’t know. We haven’t discussed that one.”

Consider this, though. While becoming a young admirer of Meryl Streep after seeing Sophie’s Choice in Australia (“That inspired one of my drama projects back in the day,” she said), the budding performer did develop a keen interest in the theater and had some musical ambitions.

“I love singing. I love singing at home,” Strahovski said, laughing while clarifying her first statement. “I don’t know about getting up on stage (to sing). I grew up doing musicals in my childhood at school, along with all the plays I used to be involved in. It would definitely be fun to do a musical one day. I do miss dancing. … If I could’ve picked singing or dancing, I miss the dancing part more.”

Strahovski even busted a few moves and crushed a lot of rhymes as Game of Thrones‘ Daenerys Targaryen in last year’s Princess Rap Battle on YouTube without viewing any of the previous seasons, then proceeded to binge-watch HBO’s most popular series.

So with so many previously hidden talents now on display, where does she go from here — TV, film or theater?

After All I See Is You, a Marc Forster-directed film in which she co-stars with Blake Lively, is released, Strahovski’s future plans remain a mystery to almost everyone but herself.

Sounding more like the enigmatic Caroline Crowley, Strahovski kept another secret when asked if she knows what’s next.

“Uh, I do. I can’t exactly say it right now but in the next 48 hours, I’m sure there will be an announcement. … (laughs) We’ll know soon,” she promised.

Since the countdown on that digital clock began ticking Wednesday, time on that 48-hour window has run out. Maybe it’s just a way to build the suspense before the big reveal.

Whatever she decides, let’s just hope there’s a happy ending for Strahovski.